Aurora was founded in 1919, the year the treaty of Versailles was signed. In an Italy marked by a post-war crisis, but bubbling with great hopes for recovery, the first steps down a long road were taken with the birth of Aurora, and the creation of the first true Italian fountain-pen. From those very first years the company showed that it was able to produce writing instruments with inimitable allure and refinement. A unique style which, following the evolution of taste, yesterday as today, brought together experience, technique, precious materials and artisan skill and refinement. Having earned the appreciation of admirers round the world, the trademark represented forms and materials which, from the beginning, were tangible examples of the most refined made in Italy products.  Aurora was simply ahead of the field in succeeding in combining artistic tradition and Italian design in the production of writing instruments. Each model created by Aurora, studied and produced with passion and indisputable ability, represents a new step forward in the history of the company, which has always been oriented towards research at the highest standards of luxury and quality. Every Aurora product has a story to tell, an Italian story, a story of modernity and tradition.

This is a rebirth of the 1930s style and is a remake of a hugely success. Design with and hand crafted from Aurora's exclusive Auroloide, produce a translucent quality that is the epitome of Italian styling and sophistication. The jewel clip, each pen is a unique example different in its color and variegation with iridescent effects. 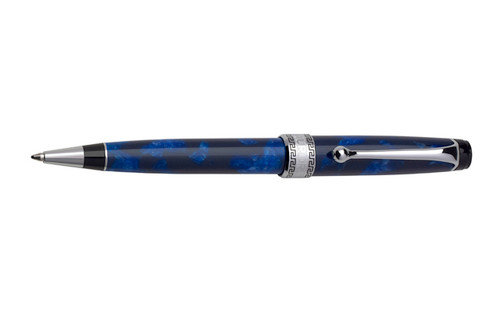